Parsing SQL Statements in Oracle
How Oracle Database processes SQL statements ?
For performance tuning basic knowledge a developer or tuning expert needs to know the basic execution of the select statement works.
What happens when a select statement get issues in the DB  (select * from emp)
This explains the way in which the database processes DDL statements to create objects, DML to modify data, and queries to retrieve data. 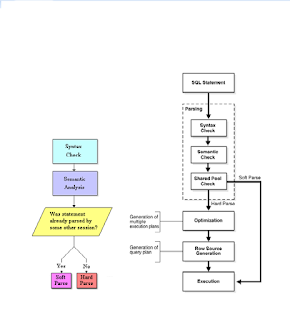 First stage of SQL processing is PARSING
When an application issues a SQL statement, the application makes a parse call to the database to prepare the statement for execution.
The parse call opens or creates a cursor, which is a handle for the session-specific private SQL area that holds a parsed SQL statement and other processing information. The cursor and private SQL area are in the PGA.
PGA :  Program Global Area (PGA) is a memory buffer that contains data and control information for a server process.
Every session will have its own PGA
Cursors: The Cursor is a handle (name or a pointer) for the memory associated with a specific statement.
A cursor is basically an Area allocated by Oracle for executing the SQL statements.
Steps in Parsing
·          Syntax Check
·         Semantic Check
·         Shared Pool Check